Brooke Clayton serves as a communications intern at the Crisis Center of Johnson County in Iowa City, Iowa. Brooke is a senior at the University of Iowa wrapping up a dual degree in Journalism & Mass Communications and English & Creative Writing with a minor in Anthropology. Originally from Evergreen, Colorado, Brooke draws inspiration from the beauty and serenity of nature and aspires to help humanity find the kind of peace inside of ourselves that she finds when in the outdoors.

What Does Making a Difference Mean Today? 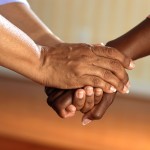 There seems to be constant pressure among millennials to achieve.

At the University of Iowa, each successive year of freshmen claim the new title of the “most accomplished class yet.” As a senior, my Facebook feed is flooded with job acceptances and pictures of people traveling the globe to study and volunteer. In a world hyper saturated with success, it’s often hard to focus on my own path, my own passions.

In the Spring of 2017, I stepped in to W332 in the Adler Journalism Building for a typical day of class. Then my dad called. I ignored it once. My sister texted me, asking if I’d talked to him. He called again. I stepped out of class, knowing something was wrong, and barely made it down the hall before I sunk to the floor, stifling sobs. He told me my cousin had died by suicide the night before.

The rush of confusion, guilt, and anger washed my sadness away. That wouldn’t hit until later, when reality settled in, and it would hit hard. I got up and beelined to the woman’s bathroom, stared myself in the mirror, gave up on understanding the pain in my reflection, mindlessly walked back to class, failed a quiz, and went home to bury myself in bed.

The only quantifiable effect of my cousin Christopher’s death in my life was the drop in my GPA that semester. Yet my heart was never the same.

His death, his suicide at the same age as me, made me question everything. It made me wonder what I’m doing in college, what exactly this degree is supposed to get me, and which experiences really matter.

I’m 21 years old, and for the first time, I don’t know what I want to be when I grow up. All I know is that old intangible cliché: I want to make a difference.

Losing someone to suicide makes all the tragedies in life feel more poignant and for a while I could imagine how my cousin saw the world before he left it: cold and mean. Lonely. But this does not have to be reality, and I’ve come to realize that making a difference does not have to mean making the world perfect.

When I remember Christopher’s face, I choose to remember him smiling. Playing guitar, laughing. I remember the gray sweater he wore the last time I saw him, how old he suddenly seemed when he had to hunch over to hug me. I remember us grimacing over our glasses of wine, the youngest in the family and the last to learn to like it. The world was still sad and scary sometimes, but it was better off because I could look across the table and there he was.

Just months before his suicide, my cousin reached out to me and told me about moving out of the house and in to his new apartment. He said, “I’m just worried about my mom missing me.”

I reassured him that of course she would miss him, but that would be okay because they had a lifetime together. He’d still see her. Neither of them would be alone. But was he trying to tell me something more? Was this the kind of conversation that could have saved his life, if he had called a crisis line that April night months later?

The insidious demons that caused my cousin’s death did not die with him, they threaten the wellbeing of people across the world. Not only depression but the pain of poverty, addiction, illness — the fear in feeling helpless, alone.

I don’t know what I want to be when I grow up, but I know I want to make a difference, I want to fight that fear. The internship I recently accepted with The Crisis Center empowers me to do just that.

I’d like to ask everyone reading to take this number down, to make a note of it:

This is The Crisis Center’s Crisis Line. It does not necessarily mean a suicide hotline. It means a set of ears to listen and a voice to respond, if you even want to talk, which you don’t have to. It means no judgement, no evaluation. It means a human heart, beating with the one on the other end of the line, a person dedicated to nothing but being there.

Please, put us in your contacts: 1-855-325-4296. Call or text if you need someone to talk to, call or text if you are worried about someone you love. Pass the number on if you think someone else needs it. Write it on bathroom stalls, turn it in to a song and sing it while you walk, I don’t care. Just don’t ignore it.

If the only result of my internship is one single person saving that number, I’ve succeeded.

It’s hard to allow vulnerability and weakness. We live in an era of individuality where everyone wants to succeed, and no one wants to ask for help along the way. But being human means being challenged. It means being exhausted. Sometimes, it means wanting to give up. On the assignment driving you crazy, the job you can’t stand, the degree you’ve worked so hard for; on life itself.

The second we start being more open about this fact, the easier it is to overcome. And change doesn’t have to be big. Change can be as simple as answering honestly next time someone asks, “how are you,” and expecting them to do the same. It could be as simple as listening.

Encouraging open lines of communications between loved ones and between complete strangers makes the world a more connected and more caring place. For me, for now, this is the kind of difference I want to make.

Check in with your family and friends, ask them how they are doing. Really ask them. When they ask you, really answer. This question, this conversation, could change the world.

To join The Crisis Center in their mission, consider volunteering your time to a number of local and remote services: by answering the crisis phone line, answering the online crisis chat/text service. Volunteers are at the heart of the organization. For more information, visit: https://www.jccrisiscenter.org/volunteer-now/

Guest blogger Brooke Clayton is a communications intern at the Crisis Center of Johnson County in Iowa City, Iowa and a senior at the University of Iowa.

Guest blogger views and opinions expressed are those of the author and do not necessarily reflect the official position of CharityLogic, iCarol, or Harris Computer Systems.